Anyone who has watched a teenager take driver’s ed can empathize—even if that teen isn’t your own. The angst, the “omg, not my car!”. That’s one of the beauties of driver’s ed: the teen learns on someone else’s car. As is my teen. Yesterday, when he came home from school, I was pleased that was the case. 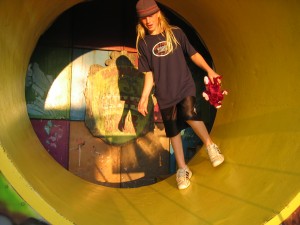 “How was driver’s ed?” I persisted.

Pause. Then finally, “It was okay.”

The story. Now, as any parent worth their salt knows, when there is a pause, there is trouble.

“What happened?” I asked matter-of-factly, cutting right to the core.

My son just looked at me with wary eyes. I could see that he was measuring his words in his mind, struggling to decide just what to say.

“The car broke down.” He ventured in a slightly hesitating voice.

Now I knew immediately that this was just the title of the story, that there was much more to hear. The question remained though: could I coax that story out of him? Worth a try. I had a feeling this was going to be good.

“The car broke down.” I reiterated.

He looked askance at me. “Yeah.”

“Well, not exactly.” He said, his voice trailing off a bit. “What is there to eat?”

Nice try, but diversion will not work.

“Let’s keep to one topic at a time,” I said. “Tell me about the car breaking down.”

“Well,” he intoned in that well-practiced, exasperated, annoyed voice that teenagers perfect early in their ten-year journey toward their twenties. “What do you want to know?”

I know that tone. It might have worked a few years ago in putting me off the chase for the truth, but I was long over that. So I forged on.

He pursed his lips. “The car stopped running…” he began, paused a couple of seconds, then continued. “After it kinda got into a little accident.”

Whoa. I didn’t expect that. I was a little unnerved. He was in a car with inexperienced drivers, after all. Perhaps I should worry more.

“Torin. Are you all right?”

“Yeah, yeah. I’m fine. And so is everyone else.” He stated flatly.

“Then what do you mean by ‘kinda got into an accident?’”

He took in a deep breath. Then it all came out rather quickly.

“The car went over a curb at a corner, kinda hit a lamp post a little bit, scraped a lot on the bottom, then bounced back into the road.” Pause. “Then the engine died.” Another pause. “Just like that.”

I was speechless. And stunned. I tried to envision what had happened, then thought of the students and the instructor, and the driver. Then it hit me.

I looked at him. In my most understanding voice, asked, “Who was driving?”

Right away, I knew I had hit on a sensitive spot. He gazed at me with baleful, slightly watered eyes.

I felt all the air go out of me. I just looked around helplessly. Finally, I sat down on the counter stool. I started to pull myself together.

“You know,” he said, emboldened a bit now that the hard part was over. “Driver’s ed teachers don’t know diddly about cars. I mean, after I couldn’t restart the car, I popped the hood. He got out of the car, looked under the hood, and just stared at the engine like it was alien. He yanked a couple of wires, but clearly, he didn’t know a thing about it. Finally, he took out his cell phone, called his office, and next thing you know, a wrecker showed up. The mechanic got the car running in about two seconds. Ridiculous.”

“So, everyone is all right?”

“And the car is all right?”

“Hmmm. Not too sure about that.”

“And the driver’s ed teacher?”

The enlightenment. “You know, he’s a good driving teacher, but he knows nothin about cars. He can drive them, but doesn’t know how they work. The mechanic, now he knows how cars work, but I’m sure he can’t teach a bunch of high school kids how to drive one. Don’t you think that’s ironic?

“Yes, I see that.” I said. Because I really did see it. We’ve all said that phrase: “Yes, I see that.” Immediately after someone has explained something to us, and we understand. We see it, even though the explanation was verbal. Seems a little out of context, but, actually, it is not. We understand because we can visualize it, “see” it in our mind’s eye. Stories do that—they enable you to visualize. As such, they are a great way to communicate information. Makes me wonder about how poorly all those bullet-point slide presentations communicate when stories are far more effective.