The Hawaiian Electric Companies have a plan. Their resource plan, filed in December 2016, outlines the near-term actions for attaining 100 percent renewable generation in their service area by the state’s mandated goal of 2045; the most ambitious—and only—such plan in the country. 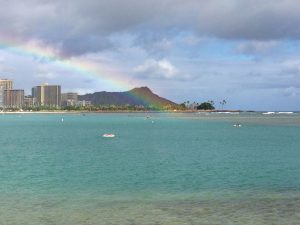 Broad, inclusive participation. Both PSIPs were created in an open, collaborative process that included multiple participants and intervenors admitted into the docket. These participants were directed to “propose questions and suggest alternative modeling inputs, assumptions, methods, and analytical approaches” that Company planners must consider to incorporate into the resource planning process.

In the aggregate, these action plans add enough rooftop and feed-in tariff solar generation combined with large-scale solar and wind to attain a 52% RPS by 2021.

Communication challenge. In Hawai‘i, actions taken by the Hawaiian Electric Companies are fodder for front page news. The December PSIP results, garnered through this collaborative process, were eagerly awaited not only by participants, but also by the media and general public. Having worked on both PSIPs filed in 2016 (as well as two previous Hawaiian Electric resource plans), I was keenly aware that the written report had to be easy to read by a wide audience.

For the December PSIP’s Executive Summary, I worked closely with Corporate Communication to design the flow of information and the messages needed to clearly communicate the enormity of the plan’s results—the first resource plan in the nation to achieve 100% renewable generation. To highlight the thoughtful planning effort, a sidebar explained seven foundational Renewable Energy Planning Principles:

The power grid needs modernization. About six months after completing the December PSIP, the Companies filed their proposal for modernizing their grid. The proposal described in detail a strategy for utilizing advanced technologies to develop its grid as a platform that enables increasing amounts of renewable generation, improves reliability and resiliency, and creates more customer choice. This modernization transforms the grid into a two-way power flow that opens the way for tripling the number of rooftop solar installations (including those with complementary energy storage systems) over the nearly 80,000 such systems already installed.

The proposed grid planning process incorporates customer input, updated assumptions, and latest advancements in technology, thus broadening grid planning as an integrated energy network Customer input is important given the significant increase in networked customer resources and flexibility in how they manage their energy use, especially through a wider array of demand response programs. This unprecedented integrated grid planning process pushes Hawai‘i even further ahead as the industry leader for attaining a modernized, renewable energy grid.

The need for greater communication. More renewable generation on the grid parallels the growth of privately-owned rooftop solar and energy storage systems, which results in customers becoming more actively engaged in the generation and management of energy. Coupled with that growing interest is the need for clear communication to better enable a successful grid transformation.